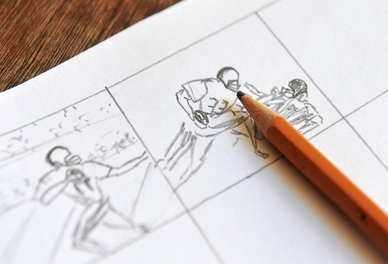 Many of us probably would like to engage in professional filmmaking because the laurels of fame of famous directors sometimes attract very much. However, filming is not such a simple thing. And it’s not enough to have professional cameras and microphones for recording sound here.

At the preliminary stage (called pre-production), a storyboard will be required. This is one of the main points, without which it is impossible to fully create the concept of a film, animation, commercial or any other scene. What it is and how to perform such actions will be discussed later. By the way, it doesn’t matter whether you can draw well or not. In this sense, the storyboard can be created not on paper but with the help of special computer programs, although the most primitive methods can be used as well. So, how to storyboard?

WHAT IS A STORYBOARD IN VIDEOMAKING?

A storyboard is a sequence of drawings that clearly depict an approximate visual embodiment of the future film, ad, video clip, etc. It indicates, first of all, the size of the shots and also takes into account the movements of the actors, the camera, possible editing cuts, and related information, for example, about the lens needed to shoot the scene. The storyboard allows coordinating work on the set, and also helps in budgeting. Later, it can be used in the script where information about each frame is described in detail.

What is a storyboard? To get an idea of how to draw storyboards, you can purchase any comic book. In many large studios, the storyboard will resemble something close to this. If you are pretty good at drawing, then drawing a storyboard may seem to you a tedious task, but at the same time, it will be quite useful for you when storyboarding some of the most difficult episodes. Each time you draw a storyboard, you are immersed in the process and present each frame captured on camera. This is still less expensive than when the whole crew is waiting when you finally reveal your vision right on the set.

Making a storyboard, they use it in advertising, presenting customers with a general picture of the future commercial. Even writers begin to sketch subjects from their books: by shuffling scenes and entire chapters, they can make the book more interesting and spectacular, and describing any events is much easier by first visualizing them. But in the cinema, the storyboard is truly irreplaceable because it helps see all potential mistakes and technical difficulties already at the stage of preproduction. A storyboard artist creates the storyboard under the supervision of the director. Then the operators are invited in the process, making comments on those points that, in their opinion, are impossible to realize (for example, the bulky cameras sometimes don’t allow them to be placed in one place or another). The artist redraws the scene until it suits everyone.

WHY DO YOU NEED A VIDEO STORYBOARD BEFORE STARTING FILMING?

Creating a storyboard may seem like an additional, optional step in creating a video. But this step can’t be ignored. Here are 4 reasons why you need a storyboard.

It presents your ideas to a crew and a client

Any business moves faster when there is a clear plan. When a storyboard is in front of your eyes, making edits becomes a matter of a few clicks. And controversial situations are excluded. It happens that a client approves the script, agrees with all the ideas of the creative team, but when he/she sees the result, they declare, “I did not imagine it that way! Redo it!” When there is a storyboard, the result is approximately clear already at an early stage, which means that there is no needless work and unnecessary expenses afterward.

It helps plan each stage of production

Despite the fact that drawing each scene seems costly and too time-consuming, in fact, the opposite is true. It’s much cheaper and faster to draw each scene than to look for good frame ideas in the process of shooting films. From now on, storyboards are an integral part of shooting any video.

Making storyboards, it simplifies the process of communicating with editors. You save your time and, as a result, money. Also, a storyboard is an opportunity to look into the future. If you don’t like something, you can get rid of it at the very beginning. Bad ideas for the plot can be cut out at the planning stage. It is very convenient.

It organizes your ideas and thoughts

Can I shoot a video without a storyboard? In general, it is possible, especially if you are a big proponent of improvisation. However, with the storyboard, you will feel more confident. Even if you don’t look there on the set, a specific plan of action will be in your head.

KEY ELEMENTS OF A STORYBOARD

There must be clear key points in the storyboard. Let’s now see what they are.

Chapters and page navigation are important in this case because it will be easier when discussing your storyboard with others. So, how to make storyboards? Next to or below each script, add a description of what is happening in the scene. Include the dialogue in it. Add shooting time information.

Sketchy image of a scene

Sketches are illustrations that are needed to quickly determine how each image/angle/movement will be used. They also help understand which pictures you want to add to the storyboard. With it, you can quickly look and analyze the entire image before you start the storyboard itself.

Short description of a scene

It includes a sequence of images that artists draw at the initial stage of creating a film/ad/cartoon, which reflects the key phases of the development of events and the main characters. Simply put, this is a summary of the main scenes, which will be shown in the project. With the help of storyboards, in fact, you can tell the whole story.

MAIN TIPS ON HOW TO MAKE A STORYBOARD

In different fields, the degree of accuracy of production is different, but it is united by a common principle – to show some story through images. So, how to make a storyboard?

A storyboard is a process that involves many steps. It can be created either manually or using a computer. If you create the storyboard manually, first you need to download the storyboard template. It looks like an empty comic book, with space for comment or dialogue. Then you need to make a sketch and add a brief description. This is the first step in the issue of how to create a storyboard.

First, decide which scenes you want to show. The storyboard is somewhat reminiscent of comics. But unlike them, you don’t need to be a professional artist to create a storyboard. You may not draw at all. So, how to create a storyboard for a vid? It’s okay if people are depicted in the form of sticks with circles instead of their heads, and the illustrations only remotely resemble the real landscape. The main thing is to correctly indicate their location in relation to the camera: face, top view, and so on.

Each step in the script should be presented visually. Depending on the final result of the storyboard, images can be either hastily made drawings or carefully designed projects. They have some story, for example, some things surrounding a person, his/her words and thoughts or anything else.

How to do a storyboard? Facilitate your work in the future and describe the work of the camera on paper. Add movement to your drawing. Arrows may indicate in which direction the camera should move. Think of lighting, a place for a microphone. Track how individual episodes will look at the same time, complement or contradict each other. On each picture, mark the sound effects because it is an integral part of the video storyboard. All this will complete your picture. If necessary, add further clarification.

5. Reach an agreement with a client

How to write a storyboard? You need to approve it and then shoot and create. The client can nod and agree with your words about the idea of ​​this video, but when it comes to watching, the client can say, “You didn’t say that it should look like that!” And you may never convince such people that you did that only with their consent. To prevent this situation from happening in the future, use storyboards that can more clearly show your idea.

So, a storyboard is a prototype of a future presentation. This extra step between the script and the realization of the idea on the screen helps many production studios save time and money. A storyboard is like a layout for an architect: you can’t build a foundation without this intermediate product.