360-DEGREE VIDEO: CREATE, VIEW, WHERE TO USE 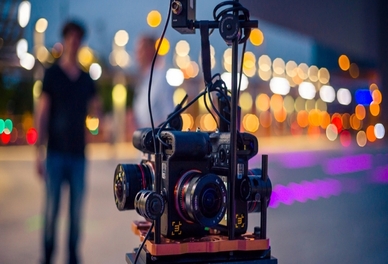 When you realize you’ve been through something truly remarkable, you always have a few words say about your experience. No matter what it is – a trip of your lifetime or an unforgettable party – you just want to talk about it.

But today, it’s not enough to just tell our friends what we’ve seen and heard. So we share photos and videos with them, reliving every moment we’ve captured on camera. And thanks to the 360° video format, even the smallest details won’t be missed now – there’s no better way to live any experience from the comfort of our homes. It’s not surprising that 360-degree video has gained so much popularity over the first few years of its existence.

What is 360° video? Basically, it’s a virtual reality technology that allows making visual content as immersive as possible without involving complex tools and hardware. This means that you don’t have to be a professional cameraman and technician to shoot panoramic clips. Naturally, the potential of this technology goes far beyond sharing memories and filming breathtaking landscapes. Here’s what you should know about VR 360° videos.

Let’s start with a bit of theory. When it comes to creating panoramic movies, you should keep in mind that the standard rules of filmmaking don’t work here. When you shoot a 360° video, everything around you will be in the frame, except for a little spot in the middle. So carefully watch what and where you’re filming. One more thing – the way the lighting works is also different. To avoid footage mismatch, make sure the lighting is consistent.

As for choosing the equipment, there’s a variety of cameras available at the time. You have to main options – single cameras and rigs which are a series of cams mounted on a platform. Since the technology is new and isn’t quite there yet, not all websites support VR 360° video shot with a single camera. Rigs, on the other hand, are much more expensive, as you need more than one camcorder for them. For a high-quality video, you need at least six cams.

HOW TO EDIT VR VIDEOS

Now that you know how to shoot a 360° video, you need to learn how to put it together. Once you’re done recording, the fun doesn’t stop. Typically, all VR videos are in high resolution, meaning that you’re going to need a lot of RAM to process your footage.

The amount of work and the complexity of editing depend on the number of scenes in the clip. And that, in turn, directly depends on the type of the movie. For instance, if you want to create a 360-degree video of you just going down the street, all you need is to set up the cam and run it. That would require minimum editing.

Your main task at this point I to pick the right editor that’s compatible with the website you want to post your video on. Some software can sync your footage automatically, so stitching a video won’t be a problem at all. After you create a 360° video and frankenstein it into a watchable movie, you’re ready to share it.

HOW TO UPLOAD A 360-DEGREE CLIP

Uploading a VR video isn’t the same as uploading a 2D film. For example, YouTube will ask you to run it through a 360-degree app first. The thing’s that the clip must be modified for people to be able to watch it in VR. Luckily, there’s a convenient guide for beginners. At this stage, that’s about all you need to know about how to make a 360° video.

So, you’ve uploaded your masterpiece. Now, how to enjoy the result? Do you need a special VR headset or what?

The answer is “not necessarily.” How to view 360° videos, then? A smartphone should be enough. You can rotate and pan the image with your fingers to see the clip from every angle. Usually, VR videos have a small label in the bottom left corner. For the best experience, though, it’s recommended to watch VR videos through a headset, like Samsung Gear VR or Oculus Rift.

HOW TO WATCH A 360° VIDEO ON A DESKTOP COMPUTER

Here’ everything’s the same as watching them on a smartphone, but in this case, you use the mouse to change the angle and rotate the camera. Make sure your browser is updated, and keep in mind that Internet Explorer and Safari don’t support the VR movie feature.

If you already have this player installed (and that’s possible because it’s still pretty popular), you can already download and watch 360° videos.

This one is a relatively simple UWP app that allows you to watch a 360° video on any device supporting Windows 10.

With this player, you can enjoy the VR 360° view in all available formats, from 4K to 8K. It’s only compatible with Windows, though.

As mentioned before, 360° panoramic video suits not only for impressing your neighbors with the clips from your last weekend getaway. Here are a few major applications.

The first sphere that VR videos will fully conquer will be advertising. Panoramic clips would allow customers to take a better and closer look at products they’re interested in.

It’ll take some time, but virtual 360° videos will eventually conquer the movie industry too. But until then, the technology will be used for producing short films where viewers would become a part of a story.

A 360-degree panoramic video is the best way to show the whole beauty of the ancient Greek statues or Roman architecture.

Action videos with crazy stunts or other stuff that only trained pros can do are very popular on the Web. With the help of 360° VR movies, those of us who aren’t ready to grab a parachute and jump out of a plane will be able to find out what skydiving feels like.

To make people interested in an event, you need to provide them with pictures and videos. And what can be more exciting than a whole virtual 360° tour of the event?

Although panoramic videos are still a fresh trend, their popularity is growing day by day, mostly due to an incredibly high level of user engagement. With the world’s major websites, like Facebook and YouTube, launching 360° clips, brand new and thrilling opportunities for attracting the audience have opened up. Hop on the hype train and order a VR video for your business now. Let the professionals take care of your customers.