HOW LONG DOES IT TAKE TO MAKE A MOVIE: FROM IDEA TO RELEASE 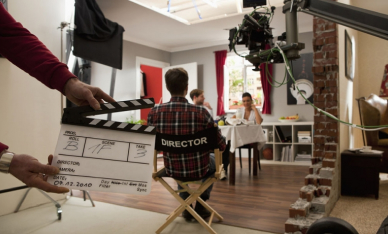 Cinema is a world of miracles that attracts people and leaves no one indifferent. Everyone has their favorite films, and probably we all have dreamed of finding ourselves in this magical world for even a moment.

How long does it take to film a movie? Did you know that a total of 100 minutes were spent on Alfred Hitchcock’s famous movie Rope which was filmed in one shot? Every minute of the film was planned, and only 10 takes were made. However, the film production timeline sometimes takes up to a year (and we don’t take script development into account). You have to understand that making a movie is not just shooting. Let’s try to figure out where the time goes and what does it take to make a movie?

THE ARTISTIC NEED OR GOING BEYOND SCHEDULE?

It takes about one and a half to two years to shoot a high-quality film worthy of going out for wide international distribution. During this period, all kinds of planned procedures and unforeseen circumstances are laid. It depends on what you want to show your audience.

In films, there must be a uniqueness of every moment to interest the viewer. How long does it take for a movie to film? Well, the average film lasts an hour and a half. And for these one and a half hours, the whole plan of the author must be revealed. The preparatory period is usually about 5 months – 2 years. During this time, literary material is selected, storyboards are created, shooting plans are drawn up, contracts are concluded, and so on. At the same time, the film shouldn’t contain anything superfluous, tedious, and uninteresting due to the long stretching pointless episode.

The filming process directly depends on the complexity of the film. But how long does it take to film a movie on average? It usually takes 1-2 years if everything goes according to plan. Post-production depends on the complexity of the process. Six months is the average time for it. This period is enough for editing, color correction, and adding effects, if necessary. Of course, the presence of 3D, the skills of specialists, and equipment affect the average time to make a movie.

HOW LONG DOES IT TAKE TO FILM A MOVIE: PRE-PRODUCTION PHASE

Pre-production is the stage of preparation for the shooting. On average, pre-production will take 8 to 12 weeks for a feature film.

How long does it take to film a Hollywood movie? The success of the project depends on the harmony of the crew. It’s better to choose ready-made teams that work together not the first time and understand each other. A director can also assemble their own crew. In this case, it is necessary to correctly distribute the responsibilities in the team.

Then an idea should be formulated before writing a script. Each replica, each action should make sense and help reveal the main idea. How long does the average movie film take to make? It is difficult to answer, but, for example, Quentin Tarantino needed 5 years to come up with the story and script for the movie Kill Bill.

Also, picturesque places are needed for production. A director must make a story live and real. Everything should look perfect.

In the storyboard, the composition of the frame, the shooting angle, lighting, the movement of the camera, and the object are noted. It is the plan by which the shooting is underway. Thanks to the storyboard, even at the preparatory stage, a cameraman can discuss with a director whether it is possible to film the shots from the technical point of view. Together they come to a decision on how best to do this and what the average time it takes to make a movie.

Production is the second step. There are a lot of participants. Everyone does their work. If any department doesn’t cope, then a director has to redo everything. The whole team should work as a whole.

Filming is carried out according to a pre-arranged schedule. It is prescribed in the checkpoint – calendar-production plan. This is the second most important document after the script. How long does it take to make a movie? Filming should be carried out on schedule; otherwise, it will greatly affect time and finances.

Production hell is a situation in which the creators of a film may face when it seems that the process is delayed for years. Initially, the term arose in Hollywood because filmmakers were the first to encounter such problems on a serious scale. There may be several reasons for this. The most common and sad thing is that we are all human; therefore, any large collective work requires monstrous coordination of schedules, work, and interests. But when conflicts, problems, and other complicating factors hit more or less key people (directors, scriptwriters, producers, leading actors, and investors), then the situation gets terrible.

For example, producers expected success from The Lone Ranger (2013). But in reality, it turned into a production disaster and a deafening box office failure. The process went wrong in the early 2000s. Screenwriters, directors were changing, there was some confusion with rights, and the overpriced budget aroused bewilderment among producers. And Cleopatra (1963) is rightly called not only one of the largest films in history but also one of the largest industrial disasters. A significant part of the incredible budget was wasted on nothing. For example, the scenery built in the UK was stupidly abandoned and never used. Due to constant organizational troubles, the filming lasted for three years, and after its completion, the directors recognized the result as “uninteresting, amateurish, and second-rate.” As a result, 20th Century Fox almost went broke.

HOW LONG DOES POST-PRODUCTION TAKE?

It’s time for editing. How long does post-production take? Editing is one of the most important (if not the most important) parts of film production. If you are an excellent editor, then you are automatically an excellent director. Editors have their own vision of the film, its meaning in it. They set the style for frames and scenes, and also build transitions and emotions as if engaged in cutting a film. The editing process is the creation process. In fact, all these processes take a lot of time, and it can be said that post-production requires almost six months (excluding, of course, delays in meeting deadlines). This is an average time that takes to make a movie filming and editing.

Effects are invented and negotiated by the director and cameraman with specialists in their creation at the stage of pre-production. The project is given on schedule after editing or in parallel with it. It depends on the movie itself.

After the approved editing, the file is sent to the colorist in the desired format. Depending on the length of the film, 1 to 5 shifts are allocated for color correction. Directors prepare a reference for the colors in which they see the film. On it, the colorist selects colors. Defects are corrected and color correction visually transforms the style of the film. Color can decide the visual perception of a story.

After assembled editing, the project is sent to the composer to create original music. Musical compositions accompany the entire plot of the film. Through them, emotions are expressed that give rise to certain movie scenes. The film is fully voiced at the studio. In large projects, a separate specialist is hired for this. With the help of sound effects, it is possible to emphasize the atmosphere of the film and its integrity, and this is of great importance in the implementation of the whole plan.

The last stage is completed by pressing the “export” button. At this moment, all the components come together and form a file with the finished product. Experience helps minimize the process of organizing and implementing filming. It is important to carry out its analysis after the work done. Each new project helps gain knowledge and acquires skills that further make people work better.

HOW TO MINIMIZE PRODUCTION TIME LOSS WHEN FILMING A MOVIE

To begin with, you should decide what you want from your own work. If you are going to make films exclusively for home use or to please relatives and friends, this is one thing. If you understand that you want to take the first step on a professional path with the help of your film, this is a completely different matter.

1. Determine the genre of the film

The first step is a clear definition of the genre of the film and, accordingly, the creation of the script. If you are aspiring filmmakers, you can’t count on the services of professional screenwriters. But do you have enough interesting life events and original ideas? Sometimes there are such events and situations happen in the everyday life that venerable scriptwriters have not dreamed of. So, why not write an amazing script based on them?

2. Invest enough money in it

The second factor, which can’t be avoided, is money. And of course, it must be taken into account from the very beginning. But actually, to make a fascinating and catchy film, it is not at all necessary to be a millionaire, hire famous actors, and use computer technology. There are great movies with a ridiculously small budget. But to minimize the movie production timeline, you should invest enough money.

3. Think over the available locations

Streets, parks, squares, apartments of your friends are free locations for filming. It is quite difficult to film in cafes, hotels, all kinds of shopping centers, as these are private territories, and much depends on a personal agreement with the administrator/owner. As you can see, you need to be able to negotiate in this profession (at least, as long as you don’t have an assistant). So, communicate more with different people, get to know each other, include them in your creative plans. One day, you will thank the universe for this.

4. Your friends are good people, but they are NOT actors

What’s the average time to make a movie? Well, you know that the success of the film largely depends on the actors, so we wouldn’t recommend contacting amateur friends. Firstly, their task is too responsible, and if they don’t know how to play, the film will look pitiful no matter how much time you spent on the script. Secondly, actors who have at least some experience understand what the filming process is and take it seriously. Friends can transfer your plans simply because they decided to go on a vacation this weekend, and your film “can wait.” Because of this, filming may be delayed for several months due to frequent transfers. After all, you may even get tired of all this, and you will not shoot any film, and the world will never know about the great director. And for professional actors, your film is a job.

5. Get ready for unexpected things

Remember that, most likely, everything will go wrong and not as you planned. You imagined sunny weather, and it started to rain. It’s getting dark already, and you are still shooting autumn morning. Curious people on the street may just come up to you and ask “Why are you doing this here” right in the middle of the 16th take! No need to despair. With experience, you will have ready-made plan B or the ability to think quickly in any situation. All that you can do for now is to think through everything to the smallest detail, and then you will be more prepared on the set.

So, a director has to clearly understand the task to imagine how much time it takes to make a movie. This is a serious question, and it should be treated responsibly. Production time depends on a large number of factors: on the video format, the scale of the preproduction, and the crew. The process can take weeks or months, or even years to implement a global vision.