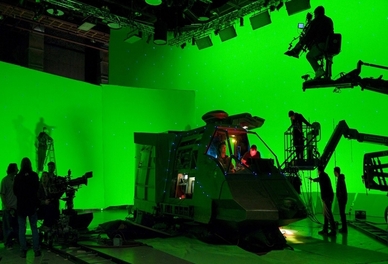 THE HISTORY AND DEVELOPMENT OF VISUAL EFFECTS

Let’s first talk about special effects in movies and their history.

These days, many special effects of the last century look fake and uncanny, but at one time, they were the milestones of world cinema. One of these films was 1927’s “Metropolis,” in which the city of the future appears before the audience. Here, the so-called Schüfftan effect was first used: using a system of mirrors placed at different angles, it was possible to create a city of the future, surrounded by unearthly landscapes. A fortune was spent on this; in addition, “Metropolis” was a European film, which became a kind of challenge to Hollywood. However, subsequently, the Americans began to actively use the Schüfftan effect, and even nowadays, directors resort to it from time to time – for example, this is how some scenes of “The Lord of the Rings” were shot.

The real breakthrough of the 60s was the “2001: A Space Odyssey” by Stanley Kubrick. This is perhaps the most famous of the first special effects movies. Surprisingly, spaceships and landscapes created half a century ago look quite realistic to this day. A lot of advanced special effects were used here, although there was no talk of any computer-generated imagery.

Even more special effects were in the original “Star Wars” movie. George Lucas created a truly fantastic world with their help. When creating the film, mock-ups and dolls were used, as well as blue screens, which were subsequently superimposed with an artificial image, a technique that became extremely popular. By the way, to make the image look reliable on the screen, you need to shoot it with an increased frequency of up to 80-100 frames per second. Here’s an example: The Death Star in “Star Wars” was just over a meter and a half in diameter.

The 1982 movie “Alien” was the next milestone in the era of special effects. The creators of the film had the task to come up with a character completely unlike a regular person, which at the same time would provoke sympathy in viewers. The audience simply fell in love with the alien doll that came to life and was made with a lot of hard work. Its head was mechanical, and the actor was hiding inside the body, and not just one, but three different ones, replacing each other. The doll alone cost a total of $1.5 million to make. A lot of effort was put into creating vibrant and expressive eyes of the character.

In Ghostbusters (1984), oddly enough, there is not a single digital effect, despite otherworldly forces and ghost traps used in the movie. Instead, the crew used animation and an effect called matte painting, that is, the use of hand-drawn images in the frame that overlapped real interiors and landscapes. Well, of course, there are lots of various props, pyrotechnics, and other practical effects used in the movie.

And can we forget about “The Matrix?” This movie, one can say, is one giant special effect! And this is somewhat true; just think of all the slow-motion scenes. No less powerful impression is made by the characters who are frozen in movement, which can be seen from all sides. In order for the frames to turn out exactly as we remembered them, the crew installed several dozen cameras that took one frame at a time or several ones with a slight delay. Then, the resulting material was sliced into something coherent. And for the shoot-out scenes where macro-photography was used, more than one dozen takes were done.

Let’s now talk about the differences between special effects vs. visual effects.

What are the visual effects? VFX (visual effects) are added after everything is already shot, and there is no reason to come back to shooting. Any use of chromakey, any use of adding objects that weren’t there in the first place – all of these cases are uses of VFX in movies.

SFX (special effects) are very different, which can be quite surprising. Special effects are just clever uses of props and materials in movies and other types of video content. Once you look into the examples of special effects, you will never be confused by the two definitions again.

WHERE TO USE SFX AND VFX BESIDES CINEMATOGRAPHY

The world of cinematography is, most likely, the first place that will come to mind when someone brings up special effects or visual effects. But the world of effects is not limited to movies, as there are lots of other different uses of effects in visual content, such as in music videos, ads, commercials, and YouTube videos.

Special and visual effects have been playing a huge role in the music industry for a long time. And while one can say that it’s not about the visuals but about the music, you cannot deny that some of the best effects in history came from the world of cinema. If you haven’t watched the following music videos, then be sure to check out the outstanding special visual effects of A-ha’s “Take on Me,” Herbie Hancock’s “Rockit,” Peter Gabriel’s “Sledgehammer,” Michael Jackson’s “Leave Me Alone,” or Robbie Williams’s “Rock DJ.”

We don’t like ads – they are annoying, they are like roadblocks in front of the content that we want to see or hear, and it just doesn’t seem right to associate them with social and visual effects, but they are very much intertwined. These effects, as we’ve already said, are mainly associated with movies and, as you can see, with music videos, but what about ads? Well, ads are a lot cheaper than movies, and this goes without saying, but they are also a lot shorter than movies, and thus, some of the ads you can see on your TV or online, are just stacked with effects, especially visual ones. Just think of all the car ads, like Renault’s “Hulk” ad, John Lewis’s “Buster the Boxer” ad, IKEA’s “T-shirts” ad, and so on.

As with YouTube videos, you basically have no limitations whatsoever. Of course, you cannot use someone else’s content, post pornographic or violent imagery, or, as of recently, provoke hatred and political tension, but, in anything else, YouTube is the perfect platform for all sorts of video content, whether it is a music video, movie, ad, or anything else that you want to make. Everything is up to you, and you can, in theory, always come up with a new genre of videos. The only thing it takes is creativity and courage. Some of the best visual effects can be found on YouTube, and some of the best visual effects artists can be found on YouTube.

As you can see, visual effects in movies play a large role in their success, look, and thus, reception. But video visual effects are not bound to movies. They are crucial in lots of other types of visual content humanity came up with over the years. True, some of the best special visual effects can be found in movies, but there are special effects for YouTube videos, music videos, and even all those annoying ads and commercials.