HOW TO WRITE A SCRIPT FOR A VIDEO 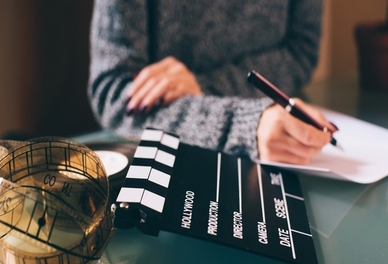 The script is the first step towards making a high-quality video, regardless of its goal and duration. It’s a well-made script that determines whether or not the viewer will catch the author’s main idea. A good script is a document that will guide the director during production, so it’s every aspect should be covered in detail, especially:

HOW TO WRITE A SCRIPT FOR A VIDEO: 4 BASIC STAGES

To figure out how to create a good script for a video, you need to clearly realize that the key idea of ​​the future clip should always come first, with every line carefully considered. Absolutely every detail counts if you plan on making a catchy and effective ad: sound, light, locations, acting. But without a decent idea, the audience will hardly understand what you’re trying to tell.

Scriptwriting consists of several stages, during which you need to:

If done correctly, a ready-made advertising video script should be:

Beginners that don’t know how to write a commercial script make the same mistake all the time: they create too detailed descriptions of scenes and shots. Keep in mind that the written text will be turned into a moving picture, so various comparisons, adjectives, and complex epithets are a waste of time because you won’t be able to shoot them anyway. The same applies to the descriptions of actions: it’s the director’s job to shoot them and think them through.

In order to write a working script and achieve the goal of the promotional video – to draw attention to the product – you’ll need to make a brief. A detailed brief should include:

The final cost of the video can only be determined after writing its script when it’s clear where to shoot, how many actors to involve, what special effects to use, and so on.

As an example, let’s make up a simple script for a water filter ad with a frame-by-frame breakdown.

The template you can use to write a script for a one-minute advertising video looks like this:

How to write a good script with this template? You need to:

For some people, scriptwriting may seem too complicated, and not everyone has the talent and imagination necessary to figure out how to write a video script. If you cherish your time and wish to see a professional team working on the script for your commercial video, contact Cinema-Friends Production.