HOW TO FIND ACTORS AND OTHER CASTING TIPS FOR YOUR VIDEO 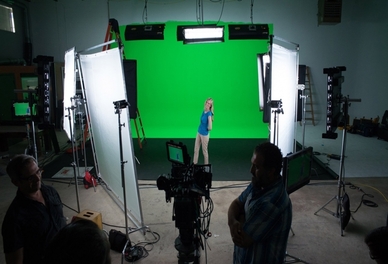 What does it take to shoot a catchy video? Typically, the first thing that comes to mind is a fresh idea. It grows into a script, and once it’s ready, you may start looking for a professional crew, rent a ton of expensive gear, and find actors, of course. And depending on your goals, the latter might be a pain in the neck. Sure, you can spare yourself the trouble and hire a team of beginners in a few clicks or even step in front of the camera and test your acting skills. But no matter how good your film crew is, poor acting will kill your project.

If you’re not OK with this outcome, you should learn a thing or two about casting. And here’s the first lesson: Successful casting auditions require a lot of planning and preparations, both from you and actors. Here’s what you need to find a perfect candidate for the role in your video.

THE ROLE OF CASTING IN VIDEO AND FILMMAKING

A few words about casting first. It’s a part of the pre-production process, during which you hire talent for a video or movie, including not only actors but also dancers, singers, and other people you might need. They must pass a series of auditions before a casting panel that consists of a casting director, producer, and director. The whole process is usually recorded.

Many directors believe that casting is the most important part of pre-production because only a well-cast movie together with the director’s vision can achieve the highest level of realism and authenticity. Unlike feature films, short promo videos and commercials don’t have to look realistic or make the viewer feel compassion for the actors (most of the times). The main goal of casting in video production is to make sure the actor’s appearance and performance encourage the viewer to buy the advertised product or subscribe to the promoted channel.

There are dozens of issues you might run into when working with actors. Here’s how casting can help you avoid them. Let’s say you planned to hold a week of casting but instead decided to cut down this time to just one day. You might’ve convinced everyone that the actors you picked will nail their roles or that you’ll make things work with extra takes. But in reality, you’ll come across numerous issues. All the problems that haven’t been addressed during casting directing (like the inability to connect with the character or take direction) will start popping up one by one, and the editor won’t be able to fix them. Each additional day spent on auditions will save you from wasting two more reshooting bad takes again and again.

WHERE TO FIND ACTORS FOR YOUR VIDEOS

Even if you’re shooting a simple video, the process of finding talent can become a stumbling block and significantly drive time costs up, especially if you’re running low on funds. That’s why it’s better to start the search from specialized websites and communities. Depending on your budget, you can try the following options.

You can contact a casting agency in every major city, and for a fee, they’ll help you choose a perfect candidate or even find actors in commercials with the same idea as yours. Casting agencies are companies responsible for talent scouting, auditions, and other details regarding film cast. Every agency has its own database of actors with headshots, auditions videos, and so on, which is categorized according to looks, age, or talent. Working with an agency, you get a team of professionals that knows how to organize the casting process. But such skills come at a price. If your budget is strictly limited, you should probably consider other options.

If you’re feeling lucky, you can try browsing through Facebook groups for actors. Just type in “Actors [your city]” in the Facebook search bar and pick the largest one. You can also use other search keywords, like “Casting,” “Filmmaking,” “Film Crew,” and so on. Then, contact its admins and ask if they know where to find actors for your project.

It’s a great option if you make an indie movie or a short commercial clip. Find the nearest acting school or art university and go talent scouting. Contact teachers and ask if you can discuss your project with students. Some of them would be glad to practice their skills for a small fee or even for free.

HOW TO ARRANGE CASTING CALLS

Now that you know where to look for actors, it’s time to prepare a meeting with them. A casting call is a great opportunity to get to know your cast better and see what they’re capable of. What is a casting call? It’s a notice you make to casting websites and agencies when looking for actors for an upcoming make a video production. To make sure everything goes smoothly, you need to take care of some details.

FIND A SPACE FOR AN AUDITION

The choice of location depends on your budget. You should know how much you’re ready to spend – this way you’ll save some time, sorting out too expensive options. You’re looking for a spot with at least two separate rooms. The size of the rooms means too. Your casting call may attract a lot of people, so you need to make sure they’ll feel comfortable in the waiting room. Likewise, the second room for casting auditions should be spacious so that actors could move freely.

MAKE A CASTING CALL AND POST IT ON APPROPRIATE RESOURCES

It’s time to make the world know about your auditions, and there are a few ways to do it. If the scale of your project is large, you can inform casting agencies. For smaller auditions, involve specialized websites to reach out to as many people as you can. These can be sites for actors or outlets that cover the latest cinema-related news. Check if the information about all aspects of the upcoming auditions is relevant. You need to specify genders, ages, and ethnicities you’re looking for.

HOW TO AUDITION ACTORS: PIVOTAL TIPS

Alright, you’ve found the location and spread the word that you’re looking for talent. Let’s get this show on the road! All that’s left is to make sure you devote enough time to each actor and let them reveal their talent. The more responsibly you approach this stage, the better the outcome. Follow these tips to smoothen up the process.

KNOW THE SCRIPT AND EVERYTHING ABOUT CHARACTERS BY ROTE

Movie auditions require maximum involvement from every crew member. How can you expect high professionalism from the actors if you don’t know the details of your own project? It would be nice if you reread the script a few times, so you could answer any questions you may get. You need to know your characters better than anyone in your team. Knowing every line, you’ll have a clearer idea of what type of actor you need for your video.

Casting isn’t about making friends. Your task is to find the right people for the job, which means that you should get used to saying no. There’s no need in comforting every actor that doesn’t fit by giving them false hope. But at the same time, your potential cast must feel like they’re being treated well. High competition can make people nervous, and you should let them know that you appreciate their work and value their talent.

WRITE DOWN YOUR REACTIONS AND NOTE EVERYTHING

You’ll probably have to audition a lot of people, so don’t try to remember everything. Start making notes in casting sheets. Maybe someone didn’t fit for one role but would be great for another. Maybe you’d like to see how the guy you just auditioned would work with that girl that came yesterday. Write your thoughts and ideas down to make room for more in your head. This way, you won’t have to stay focused on something, missing important details.

COMMUNICATE WITH ACTORS TO SEE THEM FULLY IN ACTION

To discover the full potential of the actor, you need to interact with them. Tell what you expect from them and explain the idea of your video personally. Don’t be afraid to guide them through their role. Be friendly if needed. A conversation will not only help you make things clear to the actor but also calm their nerves.

ASK QUESTIONS AND LET THEM IMPROVISE

Even if you already picture every second of the video in your head, looking at your script from a fresh perspective won’t hurt. Ask the actor whether they want to add something to their role. Maybe this will make you rethink the character. Stay open to new suggestions.

PAY ATTENTION TO SKILLS AND EXPERIENCE, NOT ONLY THE LOOKS

Movie auditions aren’t a beauty contest. While good looks mean a lot in acting, it’s the skills that really matter. Pay attention to how the actor behaves, articulates, and connects with the character. Don’t rush things when choosing between a good-looking actor with poor experience and an average-looking professional.

In addition to making notes, you should also record every audition. The casting process is all about watching each audition side a few times. To have everything captured on camera, draw a mark for the actors to stand on so that you could record all their movements, not just their faces. Ask them to say their names and show both of their profiles.

It’s not easy to choose the face of your company or brand – too much depends on them. In addition to facial features, the candidate should be talented. Convincing and realistic acting will make the audience sympathize the character and, more importantly, trust you, which is the main goal of any video. But now that you know how to find actors and arrange auditions, there shouldn’t be any problems. Be organized, respect the actors – and you’ll turn boring auditions into a wonderful experience.