HOW TO MAKE A PROMO VIDEO 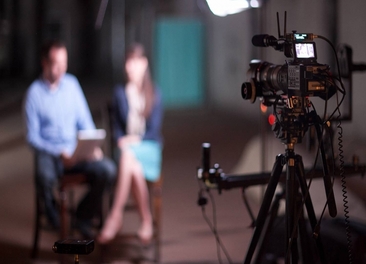 It’s hard to imagine modern business without the support of video content. Advertising videos have long taken their place among the most important tools to attract an audience. The best way to present your company, product, or service is to make a creative promo video. What’s that? In fact, a promotional clip is the same as an ad but more audience-oriented. Such content works best for promoting a new product that has just entered the market.

In addition, unlike standard ads that fit into both the Internet and the television format, promo videos are initially created for sharing online or to be shown at presentations and various events. What is a promo video? It’s a clear, specific script, built around basic information about a company, service, or product. For those who aren’t familiar with video production, it may seem that this makes the work on such videos easy. But the process of creating a promo film is much more elaborate than some might think.

HOW TO MAKE A PROMO VIDEO: SPECIFICS

To create a promo video doesn’t mean to come up with some abstract idea and make it a reality. This process requires a sufficiently deep knowledge at every stage. Sure, the formation of a simple and understandable idea is also a crucial component, but besides that, the video should encourage the audience to act with its originality.

First of all, when developing a video, you should determine what its type will be:

Also, you can’t make a promo video without defining its purpose. Depending on the task, promotional clips are divided into three types:

Such clips may have different goals. With their help, you can boost the process of training of your new employees or improve the skills of those who already work with you, as well as acquaint the consumer with the principles of your product or the specifics of your services. Tutorials get better feedback when combined with graphics and animation.

As the name implies, these videos are intended only for presenting your products, services, or employees. This is exactly what you need if you want an event promo video. You decide what type of video is right for you.

This type of video is most suitable for large companies. Their main goal is to show production potential. Documentary videos usually describe the process of creating products. The duration of such a video can reach 30 minutes or more. Might also work if you plan to make a promo video about your company.

In addition, you need to pay attention to two factors:

Now, let’s see how to create a promo video.

You can’t just shoot a video in one shot and post it on YouTube. To make a promotional video, you need to go through a few stages.

First, you need to find and develop the idea of ​​a future video. Many promotional films owe their success to a well-developed concept.

How can you create a promo video without a proper script? Regardless of how great the script is, it can change as you go along. Some aspects and flaws become visible only in front of the camera, so the script often takes on the final form already in the process of shooting.

When the promo video basic plan is ready, a storyboard is being prepared. It shows how the director sees the future footage. This stage is also important, as it allows you to look at your promo movie before the cameras turn on.

Next, you need to decide where to shoot the video and who will play in it. The storyboard gives you a general idea of ​​how the place for the shooting should look like, and the script will show what character types you need. Once you have found a place, you can proceed to the most important stage.

It’s time to bring your promotional video ideas to life. This is the most important part of the whole process. It is necessary to use the best of the capabilities of the actors and the potential of the location, as well as correctly convey the main idea.

Creating a promotional video ends at the stage of post-production when all the footage is going together. This stage includes editing, mixing down sound, adding computer graphics (if needed), color correction, and so on.

MAKE IT YOURSELF OR ORDER FROM PROFESSIONALS?

So, you already have some basic idea of ​​how to create your own promotional video. If you still want to make a video yourself, then think about how much time and energy you’ll have to spend and the amount of information you’ll have to learn. Besides, the success of the video depends on a variety of other factors, such as the quality of shooting equipment, the complexity of the idea, and the amount of graphics used. And that’s not all. How much does it cost to make a promotional video? Think you’ll save a lot by doing everything yourself?

Having figured out how to make a video, you’ll spend from two to seven days creating it, and the final result will be unpredictable. On the other hand, a professional post-production agency team will make a high-quality film for you within a day or two, saving you time and energy

All in all, if you have at least basic filming and video processing skills, all the necessary equipment, and, most importantly, the desire, you can take a chance and make your own masterpiece. If you value your time, and the result is important to you, it’s better to let a professional promo video creator take care of your product.