HOW TO MAKE A VIDEO GO VIRAL 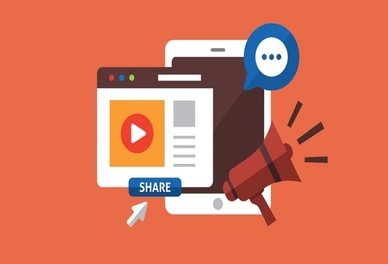 We bet you won’t be surprised if we say that video content is one of the most effective online marketing tools. The reason for that is simple: the human brain collects memories as associations (visual, auditory, and others). That’s why we memorize video ads much better than text or audio. The impact of a viral video on the brain is similar to Velcro that has hundreds of tiny loops and hooks. The more associations the viewer has while watching the video, the better the effect.

Not only vloggers and YouTubers benefit from viral clips. The world’s largest brands have long moved away from creating purely commercial ads, experimenting with associations of the target audience to gain as many views as possible. So, is there a special guide to making a video go viral? Not really, but you can improve your chances with the following tips.

WHAT IS A VIRAL VIDEO?

You probably think that a viral video is a clip that suddenly became hugely popular. In fact, it isn’t just a random piece of content that gained a lot of views on some video hosting website. One of the main signs of viral content is maximum engagement: discussions, comments, parodies, and active media reaction. And the key task in viral video production is to make the user want to share it with friends via messengers, social media, etc. Typically, the video’s idea and script already have certain characteristics that allow it to go viral. But it often happens that weird, funny clips which make no sense get millions of views, while really entertaining, high-quality videos never get the popularity they deserve.

As usual, viral videos don’t promote anything. These are fun, exciting, or heart-touching clips, telling some interesting story. The ideal duration of a viral video ranges between 15 seconds and 5 minutes.

Today, a video that gets at least 5 million views on YouTube in a week is considered viral. A few years ago, this number was much smaller, but it keeps growing together with YouTube’s audience.

TYPES OF VIDEOS THAT GO VIRAL

Just browse through the list of YouTube’s best viral videos, and you’ll see that there’s actually a certain pattern. That’s because some types of clips have slightly more chances to become popular. Here they are.

An immense number of videos are posted all across the Internet every minute, but only a few of them manage to get their share of popularity. How does a video go viral? Well, there are several reasons why some clips spread like a virus, while others fail to attract any attention.

It’s probably not the first time you hear this, but still, the idea determines everything! And if a rather trivial product of the author’s imagination can somehow turn successful at the expense of incredible, high-quality implementation, then having a frankly unsuccessful idea, you can do absolutely nothing. Always keep this in mind. That’s why 90% of a viral video’s success depends on the vision. This is the most interesting and at the same time exhausting step in video production.

If an idea defines everything, then poor execution can easily bury it. High-quality performance can really surprise the viewer, and you should use this to your advantage. The content should be focused on the viral effect – no need to save on details that the audience might find interesting.

How to make a YouTube video go viral? Show it to some celeb. Often, videos become popular after some celebrity stumbles upon them and shares them on social media. So it was in 2011 when a clip from Yosemite Park in the United States surprisingly turned incredibly popular. After it was uploaded, the video only gained a few dozen views in several months. But then Jimmy Kimmel shared the link to the video via his Twitter account, and it instantly became a hit. It now has more than 44 million views.

Of course, it’s not easy to draw celebrities’ attention to your clip, but it’s worth trying. Make a list of popular artists, journalists, and other media people who could potentially like your video. Write a short, informative description and send it together with the link to all people from the list. Vloggers are your best bet here, as they’re always looking for content.

The fourth way to make a video popular is to create a community of users around it that like the video and support it with various parodies which, in turn, become insider jokes that millions of users willingly share. The same happened to PSY’s «Gangnam Style» music video in 2012 and that «Pen Pineapple Apple Pen» video by Pico Taro. Typically, parodies of such videos also become viral. For instance, several parodies of «Pen Pineapple Apple Pen» gained over 10 million views.

Try to ride the wave of someone else’s popularity and come up with an original parody of some already well-known video. The main thing is to make sure it’s original and resonates with the interests of a large number of users. Feel free to play with cultural stereotypes. You can take a popular foreign music and shoot music video – like a parody, adding a few comedic elements to it. Without experimenting, you’ll never figure out how to make videos go viral.

Since YouTube stores millions of videos, most of them remain unnoticed. The video where something unexpected happens has much more chances to go viral. For example, a bear or a man dressed like Darth Vader suddenly appearing in the frame at a certain moment might work.

Users like it when videos go against their expectations. If you want to play with the effect of surprise in the staged video, it’s important to think every detail of the script over. Here’s how to make your video go viral: sketch a few ideas and then share them with your friends. Don’t disclose the details of the video right away but ask others to predict what will happen in it. Based on their reactions, choose the best idea and implement it.

HOW TO MAKE YOUR VIDEO GO VIRAL: STEP-BY-STEP GUIDE

Unfortunately, all the algorithms and schemes that guarantee the 100% virality of the video are nothing more than a myth. Otherwise, every other YouTube clip would get into the list of the most viral videos of all time. The good news is that there are certain patterns which, together with skillful promotion, can boost your chances to make people notice you.

At this stage, you generate and evaluate ideas for a viral video. Consider the following key principles:

Write a script. If the video isn’t staged, naturally, there can’t be any script. But in case you decide to make a video from scratch on your own, you need to know what’s going on in it. Ads, tutorials, and other staged videos will never get to the top without a script. Never rely on improvisation too much. Having a script, you’ll be sure that you can manage the attention of the audience, convey the key message to them, and make your clip one of the top viral videos of all time.

The audience decides whether to watch a video or close it in the first 3 seconds. That’s why if your clip begins with an appeal to the user, do it right – show that the potential subscriber will benefit from the information you provide.

Often, people put calls to visit a website, view or purchase products, or read the blog at the very beginning of the video – it used to work, but now the statistics have worsened. Remember the golden rule of marketing: before asking someone for a favor, give them something valuable first. In addition, an early call to action can adversely affect the promotion of a viral video, as the user will switch to another clip without having watched your content to the end and, therefore, without liking, subscribing, commenting, etc.

Now let’s see how to make a video go viral. Not so long ago, all you had to do was take a webcam, record yourself, and get new subscribers. Today, quality requirements are rising – new technologies allow you to shoot more professionally and even add animation. It feels much better to watch a vlog from 2019 than one from 2010. How to keep the viewer’s attention or «turn it on» at the right moment?

YouTube is not television, so no one expects perfect quality from you, but some processing and editing are a must. They make your video look complete.

These clips will teach you how to make videos go viral or at least point you in the right direction.

You probably still remember this one. It’s one of the best examples of how something unexpected can make a mediocre video extremely popular. In March 2017, an expert on South Korea Robert Kelly was speaking about the situation in the country after the impeachment of President Park Geun Hye when his two small children burst into the room. While Kelly’s wife was removing the younger members of the family from their father’s office, we couldn’t help but keep laughing. Later, Kelly said that he was very worried about the incident. He was afraid that the BBC would no longer invite him as an expert.

THE LIFE OF A 110-YEAR-OLD WORLD WAR II VETERAN

This video perfectly shows how a combination of a great idea and its brilliant implementation can make a staged video viral. Directors from National Geographic made a mini-film about the oldest US veteran of World War II, a 110-year-old resident of Austin, Richard Overton. Despite his age, the man still drives an old Ford pickup, drinks whiskey, and smokes cigars. In addition, he still doesn’t have a credit card and prefers to pay in cash.

The best thing about clips like this one is that you’re not strictly limited to a 2-minute time frame and can add more than one ad into a video.

And the last video on our list shows how the viral effect can boost sales. A Reddit under the nickname maxlanman published an ad he made for his girlfriend selling a 1996 Honda Accord EX. The ad was shot with the help of professional video makers and ended with the slogan, «Luxury is a state of mind.»

The initial bidding price for the car on eBay was $499, but thanks to the video, the cost rose to $150 thousand! However, a few days later the auction was canceled due to the fact that eBay took the viral effect for fraud. As a result, though, the car was sold for 20 thousand dollars, 40 times more than the initial price.

So, how to make a video go viral? Be sure to make your idea the basis of the whole project! And then don’t let it die at the production stage – implement it as qualitatively as you can. Then ask yourself a few questions:

Only when you answer all these questions, you can safely post your masterpiece and wait for success.