HOW TO MAKE AN ANIMATION VIDEO: MAIN STEPS 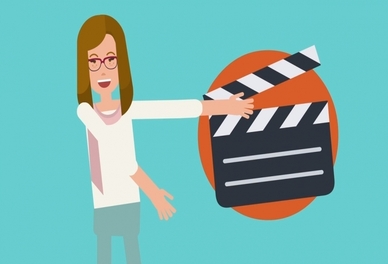 Motion graphics are one of the best ways to make your project or brand noticeable. Animation is a universal language understood by all nations, cultures, and age groups. Unlike classic commercial videos, animated movies give you complete freedom to share thoughts and ideas the way you like.

But the thing is that video production is neither easy nor cheap. A professionally made animated promo clip for a website or YouTube account may cost up to a few thousand dollars. Another alternative is to make a video yourself, using free and low-cost tools, which can be quite challenging. Without a clear plan, there will be no progress, especially if you don’t have any experience in movie making. This guide will help you get started and become a pro animation maker.

As an effective digital marketing tool, animated movies come with dozens of advantages. It’s a powerful and convenient form of presenting a product or idea through colorful, engaging graphics. With digital marketing gradually growing into a competitive marketplace, a short animated video is what can make your business stand out. In addition, animated commercials greatly increase conversion rates, bringing larger profits. But there are more benefits of using cartoons for promotion.

With an animated clip, you’re free to tell any story you want, pulling the heartstrings of your potential customers and increasing involvement. Apart from that, animated movies typically draw more attention than regular videos. Viewers tend to share and comment on them more often.

THEY MAY BE CHEAPER THAN MOTION VIDEOS

It takes a lot of creativity to make an animation video, so professional animators usually put impressive price tags on their services. But unlike motion videos, cartoon production doesn’t require a set of filming equipment and a big team. You might not even need a director and voice actors. Smaller assets mean smaller costs, so a two-minute cartoon can be cheaper than a minute-long motion video.

THEY ALL ARE DIFFERENT DUE TO THE VARIETY OF STYLES

The best thing about animated videos is the creative freedom they give. You can make every moment, every second of your clip look exactly how you want. Even if you use templates, you can be sure that the video will be unique. Just don’t get lost in all this variety.

WHAT ARE THE ANIMATION TECHNIQUES?

Before you begin to make your own animation video, you should pick the technique that would suit your goals best. Some techniques fit better for short clips, while others are mostly suitable for full-length movies. Below are the main types of animation that studios use to create digital characters for TV shows, commercials, company logos, movies, videos, and games.

It’s the most commonly used animation technique that has adopted some of the methods of traditional animation. It goes like this: the animator places thin transparent sheets of celluloid on paper animated characters are drawn on, and then redraws them on film. In the end, frames with different characters overlap each other, and the high transparency of the film allows for creating a composition of various elements and characters. Computer-generated 2D animations are created the same way but without using physical objects.

3D animation (or CGI) is the youngest and most promising type of animation based on generating images with the help of computer programs. Here’s how to create animations in 3D: first, concept arts are drawn, which then are used to create a three-dimensional model. Next, the artist ‘puts on’ textures on this model and creates its ‘skeleton’ that allows the model to move. In the end, the animator gets a fully-functional model and begins to bring it to life.

This type of computer animation is more like traditional animation. All you need to do is take a picture of the object, slightly move it, and take another picture. Repeat these steps several times, and you’ll get a series of frames which create an impression of movement. There are many forms of stop motion animations, including Cut-Outs, Claymation, Puppets, and others. But the bottom line is that to make an animation video, objects that need to be moved are photographed sequentially many times.

Have you ever wondered how promo videos, animated logos, movie intros, and ads are made? Usually, they’re created with the help of motion graphics or multiplication of animated frames to create a smooth movement between frames. Programs used to multiply frames support scripts that automatically change the animation to create numerous effects. 3D compositions are created from flat elements moving relative to each other, which creates the illusion of volume. They may also be accompanied by sound effects or music. Such objects are often used in multimedia projects.

This technique is one of the oldest forms of stop motion animation that takes its roots in the early 20th century. Here’s how it works: the animation maker takes a piece of cardboard and cuts out characters from it. Then they place the characters on paper and take a picture from above. Then the characters are moved a little and photographed again. The best thing about this technique is that you don’t need any knowledge of advanced animation programs.

In this type of animation, everything revolves around text. It’s based on original fonts, unusual writing styles, and color styling. The text is animated and transformed. Here, the main trick is not to overdo it with the number of letters. The text should be capacious and concise at the same time. Usually, it’s divided into key theses, consisting of 3-4 words. Typically, typography animation is used in ads and commercials.

HOW TO MAKE AN ANIMATION VIDEO

Basic video production is already challenging enough, so don’t expect animation to be easier. The process of producing an animated movie consists of steps, and each of them requires certain knowledge and skills. Whether you’re planning to create an animated video yourself or looking for a creative team to help you out, a step-by-step guide can come in handy. Here’s what you need to do to create a quality cartoon from scratch.

The basic rule of marketing says, “Your content should be aimed at your audience.” So, before you start putting the video together, figure out who you’re speaking to, that is, define who your customer is. Once it’s done, it will be much easier to create a script, and the animation process will go much smoother. The better you handle this step, the more views your video will get. Also, it would be nice to know where most of your viewers will watch the video – in browsers, on Android or iPhone – to optimize the clip for a particular platform.

SEARCH FOR IDEAS AND CHOOSE YOUR ANIMATION TECHNIQUE

It would be wrong to think that animated videos work best for businesses based on fun, playful concepts. But due to its versatility, animation can be used for any concept. Regardless of what type of company you run, you’ll easily find an animation technique that would fit your objective perfectly. For instance, if you’re working in the B2B sphere, you should opt for 3D or 2D animation. But if needed, you can make any cartoon look serious. Either way, you can reach any goal with animation.

WRITE A SCRIPT AND CREATE A STORYBOARD

A script and storyboard are the foundation of your future video. Both will give you an idea of how the process of animation should go and how the clip might look before the first model is created. Also, a storyboard can help you understand whether the idea of the video appeals to your target audience or not. A storyboard is like a short comic with every page depicting a certain scene from the video.

At this stage, you’ll need to decide how to animate the video. Here are three options to choose from:

Without the background music and sound effects, an animated video is useless, no matter how good it looks. When choosing a track, make sure you took care of the copyright issues. You can either do voiceovers yourself or hire a professional to make the clip sound great.

Digital animations need to be rendered. Basically, it’s a process when all those models and ‘skeletons’ are transformed into a video file. When rendering the video, choose the format you need. It could be MP4, AVI, MOV, FLV, or WMV.

Well, that’s about all you need to become a video animation maker. Follow these tips, and you’ll start making clips that would double your profits and subscribers. Stop torturing your customers with long and boring texts. Visualize the information. With a good animated video, you can build a relationship with the customer before your manager contacts them.