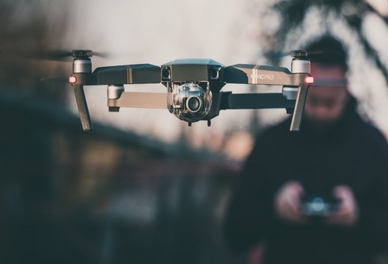 Only a decade ago, a magnificent shooting from the height of a bird’s flight seemed possible only in high-budget television films or commercials of leading corporations. Today, instead of hiring helicopters and installing complex camera cranes, drone videography becomes widely spread.

Of course, advanced directors sometimes cannot shoot without expensive technologies to achieve the wow-effect on the screen. But drone photography and videography in capable hands can make a no less vivid impression than, for example, the scene of helicopters’ flight in the iconic film “Apocalypse Now.” So, what is drone videography and what do you need to know about it?

WHERE TO USE A DRONE FILMING

It is hard to believe, but initially unmanned aerial vehicles (UAV), to which drones actually refer, were only at the disposal of the military. The purpose of this equipment was the scouting of the enemy’s territories. In the XXI century, while shooting video from a quadcopter, civilians do not even think about the combat past and present of this technology.

But let’s not focus on sad history. What is aerial drone videography used for in modern realities? In the commercial sphere, there are three directions for the use of the “floating camera.”

As we’ve said earlier, aerial filming plays a huge part in cinematography. A lot of iconic films were remembered by the audience particularly thanks to smart camera solutions in the air. You can get footage at high altitude using a helicopter to capture nature and cityscape or using various camera cranes in more limited spaces (stadiums, pavilions). With the proliferation of drones, aerial filming has become available to novice directors and helped save budget for eminent filmmakers. You may agree that it’s hard for a newcomer to refuse to add an impressive panorama of an evening city to their short film.

The music industry has long been depended on colorful video clips whose budget can reach several million dollars. And with the penetration of social networks and YouTube into our lives, the musical performers do not miss the slightest opportunity to bring their work to the masses through the video because sometimes it is viral videos that bring commercial success to songs. With the help of a drone, you can diversify creating music videos with luxurious high-altitude shots of pool parties, or the natural beauty filmed from the sky.

The promotion of goods and services went far beyond the pavilions and dull template texts at least 10 years ago. In an attempt to attract the target audience, both mega corporations and young startups increasingly resort to shooting large-scale videos using the most advanced technologies and special effects. Drones have turned out to be very useful in such shootings. Slow flights over the forest or the night city lights will add more bright colors and originality to any promo video.

Despite its availability and compactness, the use of a drone for any shooting requires additional skills and knowledge. Before you start professional drone filming, you must consider the following issues:

1. The model and the type of drone. Remember that not all drones are equipped with high-tech cameras. Devices with high-quality optics are more expensive, they are heavier than the budget ones, but they provide an excellent picture in low light. Decide on the goals of your filming and choose a model that is appropriate for your needs. Spoiler: budget devices will not be enough in the professional field.

2. Influence of weather conditions. Strong wind, frost, rain, thick fog, snowfall, and heat are not the best friends for drone videographers. Monitor the forecast of the meteorological center in advance and be at any time to start shooting if it suddenly clears up.

3. Coordinated work of a cameraman and a drone’s pilot. Not everyone who operates a camera perfectly knows how to do drone videography. Also, not every UAV manager is able to capture such a picture that a director really needs. Using the device for personal purposes can allow deviations from the quality, but professional shooting from a drone requires that every frame and the span above the ground should be verified and correspond to the director’s vision. Before the start, both the cameraman and the director must deliver clear instructions to a person who controls the drone. All filming process must be coordinated at the set until the shooting is completed.

4. The location and possible regulations. It is not enough just to launch the drone in the air; you need to think about its landing in advance as well. Before you start filming a video from a drone, it is necessary to study the terrain in detail for the planned launch and landing of the device. Also, we do not recommend making videos in crowded places, so it’s necessary to study the restrictions on UAVs in advance. Not every country allows this, and furthermore, you may suddenly find out there is a secure area not far from the picturesque place.

5. Watch the sunlight. How to make a flight plan for drone videography? The most obvious thing is not to shoot against the sun. Rays should illuminate the equipment from behind. Moreover, if you are shooting architectural objects, it will be better to use sun surveyors – these are applications that show how a certain place is illuminated during the whole day and from which angle it is better to shoot. Also, do not forget that the best time for shooting is sunset and dawn.

HOW MUCH DOES A DRONE FILMING COST?

Whether it’s a company’s promo video, a short film for a social project or a music video, the thing that will help you surprise the viewers is drone videography. Prices of such work depend on the length and height of the flight, the peculiarities of the selected area, the time of day, the weather and the urgency of the work.

It is not necessary to shoot commercials from the air itself. Drone filming requires careful preparation and experience, to be confident piloting it is necessary to make several successful flights. Order a drone’s videography from professionals is the best solution if you care about the final result. See how profitable a drone filming is with our service.